OUTLOOK FOR THE GLOBAL SCANDIUM MARKET TO 2028 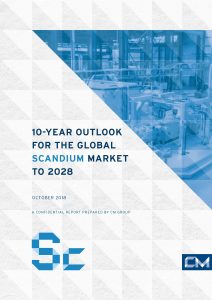 Scandium in the earth’s crust is as common as cobalt, and more common than both lithium and lead. However, it is evenly dispersed and rarely occurs in deposits with any significant concentration. Consequently, scandium has been expensive to mine and purify. Its high cost has been a major deterrent to the metal being used directly in applications requiring significant volumes, despite the clear advantages it brings.

Scandium is a highly effective alloying element for aluminium; small additions (0.1- 0.2%) can result in major improvements in overall performance and properties, including strength, corrosion, weldability, ductility, anodization performance and fatigue resistance. No other alloying element(s) gives the same level of multiple property improvements in such a diverse range of alloy systems as scandium.

Rapid growth in Chinese scandia (scandium oxide) production capacity over the past four years has resulted in the global market moving into significant surplus, a situation which, in theory, should stimulate a strong demand response, especially from the aluminium sector. So far, the Al-Sc sector has been slow to respond, but is this likely to continue to be the case?

A key enabler for the sector, we believe, is a close developmental relationship between new supply and downstream markets which, together, could grow the market at a rate more closely aligned with higher uptake rates.

The Solid Oxide Fuel Cell (SOFC) market is currently the largest market for scandia, representing an estimated 76% in 2018. SOFC growth, has been consistently strong and could achieve more than 20% annual growth over the outlook period.

On the supply side, the emergence of a new generation of primary scandia production projects looks set to become an industry game changer. In our view, these new production facilities will remove a critical supply barrier, by offering scandia under long-term supply contracts and at volumes and prices which could prove compelling to the market. Primary mine development proposals in Australia have significantly higher concentrations of scandium, up to 500ppm, and thus could potentially lower production costs by a significant margin. Could this new supply base lead to the emergence new markets and significantly stronger demand over the long-term?

First-mover advantage, we believe, is a critical competitive edge in the early stages, particularly in terms of market development, leading to offtake agreements, funding and, as a result, further growth?

This report investigates the outlook for the scandium market to 2028, concentrating on both the supply and demand outlook, especially the potential for the metal to become widely used in large volume applications, such as SOFCs and Al-Sc alloys in heat exchangers (HEX).

Get a copy of the full report now